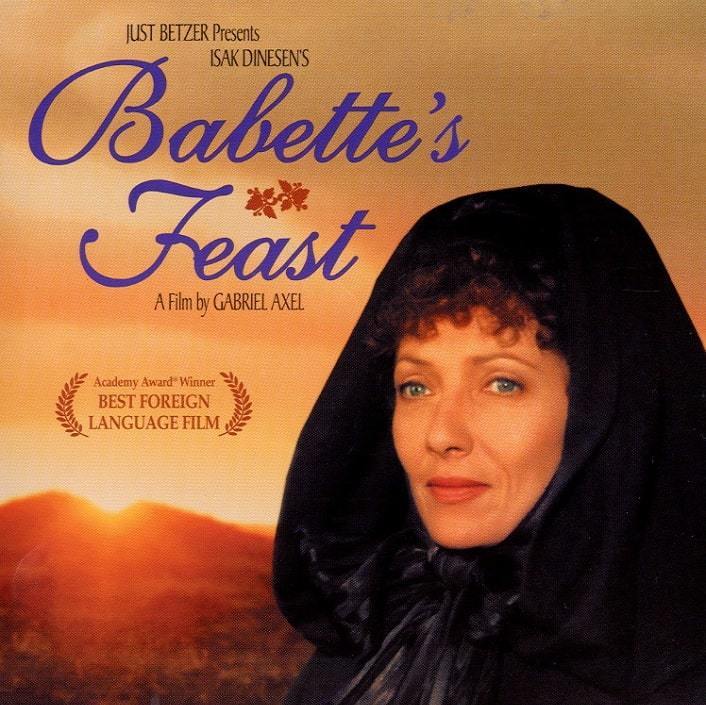 Some of us may over-eat this Christmas…some of us will remember the 1970s ad: “I can’t believe I ate the whole thing!”

In the story of “Babette’s Feast” we discover a beautiful parable of the wonders of Christmas. It was written by Danish writer, Karen Blixem who spent 1914-1931 in British East Africa (Kenya) farming a coffee plantation. She is best known for her book, “Out of Africa”, which was made into the 1985 film, “Out of Africa” starring Meryl Streep and Robert Redford. She returned to Denmark and began writing under the pseudonym, Isak Dinesen and wrote, “Babette’s Feast”. I watched the film adaptation a few years back and was deeply drawn into this parable of God’s wondrous grace at Christmas.

This is a longer blog than normal, but let me tell you the story:

The story is set in an impoverished fishing village off the coat of Norway. The movie locates it in a coastal village in Denmark. The streets are muddy, the roofs are thatched, the village is poor, and the people follow an elderly white-bearded austere Lutheran pastor. The villagers of Norre Vosburg renounce all worldly things, and so they wear black clothing and eat a steady diet of boiled cod and a gruel made of boiled bread and ale.

They met on the Sabbath and sang songs of the “New Jerusalem”, while enduring, even tolerating their life on this earth. The old pastor had two beautiful daughters named Martine (named after the great Reformer, Martin Luther) and a younger daughter named Philipa (named after Luther’s brilliant disciple, Philip Melonchton). The villagers used to attend church just to feast their eyes on these two radiant beauties.

One day a dashing young cavalry officer saw Martine and he wanted to marry her, but she resisted his advances, for she only wanted to care for her aging father. The cavalry officer later married a young aristocrat.

On another occasion the greatest opera singer of the day, a Frenchman named Achille Papin, heard Philipa singing one day and wanted her to come to Paris with him to make her a star. She and her father refused the offer and Papin left dejected.

Fifteen years passed. The old pastor is dead and the two sisters are still unmarried and have attempted to carry on their father’s harsh and austere mission. The little church had splintered due to conflict, and only a few still attend the Sabbath worship services, while the two sisters continue to boil bread for the toothless elders of their church.

One night during a terrible storm the two sisters heard a knock at their door. A woman collapsed at their doorway exhausted, speaking no Danish. She had escaped from Paris during the Civil War. Friends and family had been killed. All she had was a note from the opera singer asking them to kindly take her in. The note said: “Babette can cook.”

They took her in and Babette becomes their cook and housekeeper, and for 12 more years she boils cod and makes gruel for this devout group of Lutheran followers. No one ever talked to Babette of her past life. It came as a great surprise to Martine and Philipa when Babette received her first letter from Paris after living with them for 12 years. Apparently, one of Babette’s friends had continued to purchase her a lottery ticket each year and she had finally won. She had won a windfall of 10,000 francs.

The two women thought Babette would leave them, but much to their surprise she did not.

They had been talking about a celebration to commemorate their father’s 100th anniversary of his birth when Babette’s letter arrived.

Babette requested she be allowed to make the meal for the celebration party. She had never asked a favour in 12 years…now she pleaded.

The two women agreed, but it was secretly agreed among their little religious order that no one would comment or gain pleasure from the meal Babette would create.

One might imagine that a steady diet of boiled cod and gruel would have killed their taste buds anyway.

Babette ordered the groceries and many exotic delicacies arrived.

Amazing sights never seen in this austere village were seen. Work men pushed wheel barrows loaded with crates full of small birds, a cow’s head, truffles, pheasants, other strange creatures, even a huge, live tortoise snaking its head around as it was carried into the kitchen.

On the snowy evening of December 15 the party began! They sat down to a table full of china, silver ware, candles and evergreens. Even the dashing cavalry officer, now a general and over 30 years older, was there. While the villagers tasted these strange dishes one after another they never said a word nor changed their grimed-faced expressions. Babette wondered why they were not enjoying it!

The General, on the other hand, was overcome by the culinary wonders and explosive tastes that passed his lips.  He raved about the meal over and over again during the feast. But, something began to happen. The villagers began to enjoy the wondrous feast placed before them. Undeserving of so great a gift lavished before them, they began to warm up to the occasion.

Their blood warmed, their tongues loosened, and they began to speak of the old days. Two brothers confessed to one another and were reconciled. Two women who had not spoken to one another for 10 years began smiling and talked to each other. One little lady burped and a brother next to her yelled: “Hallelujah!” They all laughed…this had not happened in years!

Heady with the moment, overwhelmed by the wondrous gift of the sumptuous meal the General rose to make a speech.

The story ends with old parishioners holding hands around the village fountain and singing lovely songs of their faith. It is really a COMMUNION scene of rejoicing in God’s goodness and grace.

Babette’s feast had opened the gate, but grace had strolled in among a grim-faced group for the first time in years.

The AUTHOR writes: “They felt [for the first time] as if they had indeed had their sins washed white as wool.”

The final scene takes place in the kitchen. Babette sits among pots, pans, carcasses, bones, grease, empty bottles and vegetable trimming. She looks as exhausted as she had 12 years previous on the night she arrived in the storm. She is completely spent looking as exhausted as Jesus might have looked while hanging on His cross. Martine and Philipa complement her on the meal and say they will greatly miss her when she returns to Paris. Babette looks at them and says she doesn’t plan to return to Paris, for she has spent the full 10,000 francs on the meal they had just eaten. The women are immediately jolted by the news of the cost. They had done nothing but let Babette live with them and be the housekeeper and cook, their servant in effect. And now she lavishes this undeserved gift on them!

The cod and the gruel eaters are just beginning to understand the riches of turtle soup and pheasant under glass.

Isak Dinesen is undoubtedly talking about enjoying the riches and treasures of God’s grace in her story: “Babette’s Feast”. She is challenging us to stop settling for boiled cod with grimed-faced religious faces. She wants her readers to ENJOY the full weight, even the pleasures of God’s grace.

The two words don’t seem to go together. They seem at first blush to be opposites, poles apart. A hedonist is one who lives for pleasure, but a Christian hedonist, according to pastor Piper, is a disciple of Christ who has learned to enjoy the pleasures of God’s grace, mercy, and love.

“Babette’s Feast” is not simply a story about fine dining, but really a wonderful parable of God’s grace.

Isak Dinesen leaves no doubt of this when she has the General rise up during the meal to make a speech. He stands and says:

“We have all of us been told that grace is to be found in the universe. But in our human foolishness and short-sightedness we imagine divine grace to be finite. But the moment comes when our eyes are opened, and we see and realize that grace is infinite. Grace, my friends, demands nothing from us but that we shall await it with confidence and acknowledge it in gratitude.”

Twelve years before Babette arrived among the graceless ones. They had heard sermons on grace for years and years. And having heard these sermons on grace, each week they would leave church, and try to earn God’s favour for the rest of the week. They sought to do this by their pious religious lives and renouncing all worldly pleasures. They sought to PERFORM rather than live by GRACE.

God’s grace came to them in the form of a feast. Babette’s Feast, a meal of a life-time was lavished on people who had no way to pay for it or earn it, nor did they even deserve it!

BUT that didn’t matter because grace came to these people as it always comes: FREE of charge, no strings attached, on the house!

Dear friends, stop striving, stop performing, and stop trying to earn your way into God’s good graces. Someone has already paid for you in full. So enjoy the feast and become a Christian hedonist.