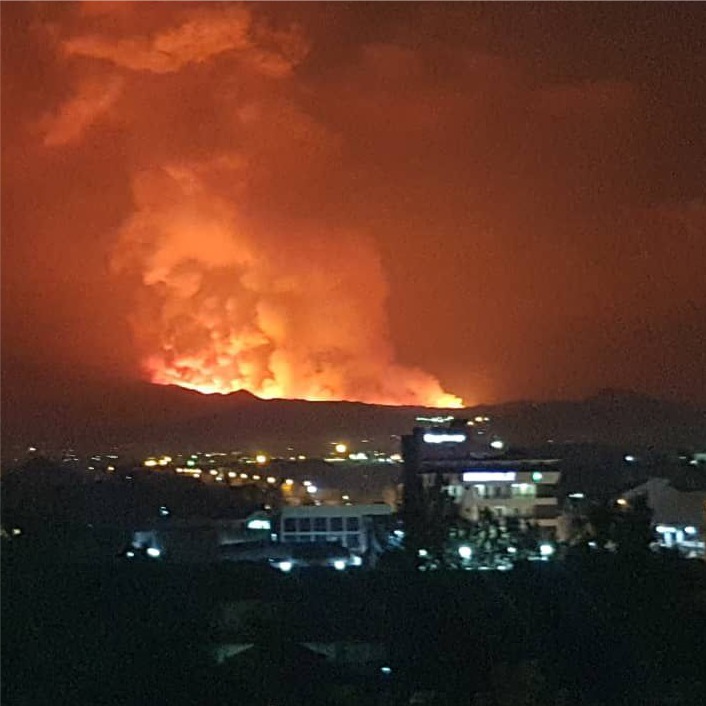 “I am fleeing to Rwanda because I have no choice.”

“The volcano has destroyed everything in its way. Our homes and properties were all destroyed by the hot lava; that is why I am escaping to Rwanda.”

“On the first day of the eruption our family did not move because there were no orders to leave the city, but today we are leaving the city because we have been ordered to leave. If I leave, my shop will be looted. I had to make a decision: either my life or my shop.  I chose to run away and leave my shop to save our family.”

These are just some of the reports shared with Fellowship International missionary Apollo Midigo from “ground zero” near Mount Nyiragongo.

On May 22, 2021, the Nyiragongo volcano—one of the most active volcanos in the world—began erupting. Located 12 km from the city of Goma in the Democratic Republic of Congo, the volcano’s lava flow crept towards the town coming within 500 metres of Goma International Airport before stopping just short of the city’s built up area. Hundreds of thousands of people have been fleeing the city over fears of continuing eruptions, and the resulting lava flow, and deadly ash. While earthquakes continue to rock the region, more people are fleeing from their homes as it is feared the worst is not over.

Goma is no stranger to tumultuous times. In the summer of 1994, the genocide in neighbouring Rwanda reached a climax with over 800,000 refugees fleeing to Goma. Two years later, the First Congo War began in D.R. Congo, quickly followed by the Second Congo War six months after the first war ended. In 2002, Mount Nyiragongo erupted leaving 600 people dead and covering most of the city of Goma with lava.

The Fellowship has two missionary couples serving the Congolese people. Apollo and Lois Midigo partner with ministries based in Goma, while Richard and Brenda Flemming partner in the Kinsasha area of the country.

FAIR, in partnership with Tearfund Canada, is working through on-the-ground partner, The Baptist Church of Central Africa, to provide food assistance for the next few months for the poorest families displaced by the eruption. Living in one of the 23 poorest countries in the world, the Congolese people have lived through some very difficult days and this current crisis will be another test of their resiliency.

WOULD YOU PRAYERFULLY CONSIDER HOW THE LORD WOULD HAVE YOU RESPOND TO THIS NEED?

Your partnership with FAIR will provide the opportunity for believers in D.R. Congo to distribute much needed aid while also practically sharing the love of Christ to those who have had to evacuate.

Please be in prayer: